Nether Wallop Mill, Stockbridge, Hampshire 15th March 2014
It is very rare for a river keeper have an obituary in the Daily Telegraph and rarely one as long and fulsome as that for Mick Lunn, third generation head keeper to the famous Houghton Club on the River Test. The only one I could recall that Mick's came anywhere near was that of Frank Sawyer in 1980. 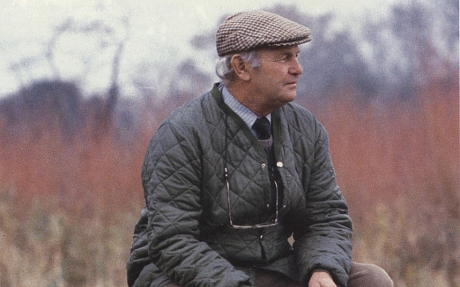 I have to admit I only briefly knew Mick when he was at the Houghton Club, as he retired just as I started Fishing Breaks. However, living as he did in Stockbridge for his retirement I got to know him a little. In his latter years it is fair to say he fell out of love with the River Test. He had strong opinions that he was happy to share and through his friend Clive Graham-Ranger he found a regular outlet in print and on TV.  Undoubtedly he made some good points, but I felt he was too extreme in many respects which cast, for me at least, a pall over his otherwise remarkable life. Here is the obituary that appeared in the Daily Telegraph 27th February:

"Mick Lunn, who has died aged 88, was head keeper of the Houghton Club, arguably the world's most celebrated fly-fishing club, and the third generation of his family to occupy the post.

The Houghton Club has 15 miles of double-bank fishing on the river Test, near the small town of Stockbridge in Hampshire. Rising at the village of Ashe, the river winds gracefully through the county's chalk downlands until it reaches the sea at Southampton. Since the 19th century its pellucid waters have made it the destination of choice for fly-fishermen, particularly when the clouds of mayfly are making a banquet for the trout.

Founded in 1822, the Houghton Club initially had 13 members. Today there are 26, and it is a byword for exclusivity: election is by invitation only. Its headquarters remain at the Grosvenor Hotel in Stockbridge, and the club's record books throw light not just on two centuries of the members' fishing exploits but also on the way they responded to portentous events. An entry dated May 10 1940 reads: "Germany today invaded Holland and Belgium, Mr Neville Chamberlain resigned and Mr Winston Churchill became PM. A warm bright day with a poor rise. Few fish moving."

Later that year the secretary reported: "In the autumn some Australian troops arrived in Sheepbridge [on the Test] and proceeded to bomb the water. They did not kill very much and fortunately they were shortly afterwards transferred to other fields - perhaps to Libya, where no doubt they put their bombs to better use."
The waters at Houghton have been fished by the Prince of Wales, British prime ministers and American presidents. In the 19th century JMW Turner and Sir Edwin Landseer fished there and made sketches of their surroundings which they presented to the club.

The Lunns were the club's head river keepers from 1887, when William Lunn (Mick's grandfather, a former child labourer in an Essex brickyard) took on the job. William made a lifelong study of fish and fly, paying particular attention to what the trout actually sees. He created some 40 fly patterns, many of which are still used today; these include the Lunn's Particular, Caperer, Houghton Ruby, Sherry Spinner and Orange Quill Variant.

William's son, Alfred, took over from his father in 1931, and served as head keeper until 1962, when the role passed to his son, Mick. An only child, Mick had been born at Houghton on February 14 1926, and to mark his birthday had been christened Valentine. He disliked the name, and managed to jettison it at the age of seven, when he won first prize at the local village fete fancy dress competition with his impression of Mickey Mouse. The name Mick stuck.
Later in life he described the Houghton of his childhood as "very insular", adding: "Even though the next village was only three miles away, we never went there; it would have been like going abroad." The family lived mainly off the land (growing their own vegetables, shooting and trapping for the table) and the river (taking pike and grayling). During the war - when meat was rationed - Mick's mother, Alice, sometimes served up a moorhen and coot casserole.

As a boy he sang in the choir, ferreted for rabbits and enjoyed football (the village could muster only 10 boys for its team, so the blacksmith's daughter was conscripted to play on the wing). He first cast a fly at the age of eight, and learnt to tie flies at the feet of his grandfather. His first fly (to which his grandmother gave the name Val's Own) had a Rhode Island Red hackle and tail, and a peacock herl body. By the time he was 10 he was selling flies to Houghton Club members.

A bright boy, Mick was educated at Andover Grammar School (where his fees were paid by two members of the Houghton Club); but there was never any doubt that he would follow the careers of his father and grandfather.
From 1946 to 1948 he did National Service in the Far East as a lieutenant with the Devonshire Regiment. He then joined his father on the riverbank at Houghton. During his early days as an "apprentice", one of the club's members, the Liberal MP Lord Harmsworth, would lie down on the bank after lunch and go to sleep, instructing the young Mick to "wake him up if a good trout rose".

Over the years until his retirement in 1992, Mick Lunn oversaw the expansion of the club's fish farm, and was greatly valued for his rivercraft as he guided and advised fishermen on the banks of his beloved river. Like all good river keepers, he could spot trout lying in the water when most fishermen could not, and he was always ready to offer sage advice about which fly was best suited to the conditions.

On the matter of choosing the right fly, he counselled: "As far as I'm concerned, it's the size of fly that matters... size is pretty well everything: no matter what you use, during a fall of black gnat or hawthorn flies, the trout will be interested only in very small or large black flies."

Sometimes Lunn had to gratify the whims of Houghton Club members. The eminent plastic surgeon Sir Harold Gillies, for example, got it into his head to emulate those Victorian fishermen who had fished the Test from horseback. He co-opted Lunn to chauffeur his Bentley close to the water, while Gillies - standing on the passenger seat with the sunroof down - solemnly cast his fly. "He did rise one fish," Lunn observed wryly, "but generally we put down every trout for miles."

In 1990 Mick Lunn published a memoir, A Particular Lunn: A Hundred Glorious Years on the Test (written with Clive Graham-Ranger). In it he criticised modern farming practices, the water authority and the expansion of the local population, all of which in his view had had deleterious effects on the well-being of the river Test. As Lunn told Graham-Ranger in an interview with The Telegraph in 2011: "Years ago the Test was always crystal-clear. When I was a boy at school in Andover, it was a little market town. Now it's almost the size of a city and its waste water is finding its way into the river. They are still building more houses, though, and I have no idea where the water is going to come from to feed its domestic and commercial plumbing demands. Also, the weed in the river is not so prolific, particularly ranunculus, which acts as a filter and cleans up the river. "

When Lunn retired, Houghton Club members bought him a cottage on a feeder stream near the Test, and he continued to fish, landing his final trout at the end of last season. He was a popular after-dinner speaker, and enjoyed shooting, horse racing and golf. Mick Lunn and his wife, Joyce, had a daughter, but there was no son to continue the family tradition.

Editors note:  My personal favourite story of Micks' (which I think is in his book) relates to D-Day. In the run-up to the invasion General Eisenhauer fished the Houghton Club water, guided by Alfred, Mick's father to whom the General took a shine, so much so that he invited Alfred to accompany him a few days after D-Day, to visit the troops in France. Alfred was no soldier, but he was a regular in the Home Guard and for the lack of anything else to wear put on that uniform for the trip. As they reached France and disembarked from the boat onto the Mulberry Harbour Alfred heard one solider shout out, to the hilarity of all, "We must be f*****d, they've sent in the Home Guard". 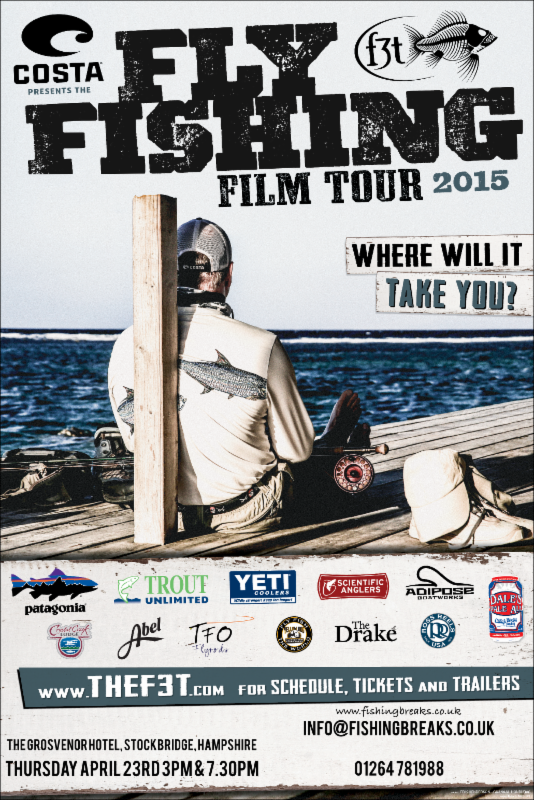 Last year's Fly Fishing Film Tour was a sell out, so I am delighted to welcome it back to the sole UK venue showing the six pulsating short films from around the globe.

We have the beauty of Trout in Montana, Atlantic Salmon against the rugged backdrop of Iceland, saltwater antics in Cuba, Calico Bass in the surf of California and the Lost Boys of Yantarni battling the Alaskan elements for Coho Salmon. It is two hours of the best fly fishing films you will ever see and guaranteed to make you want to go fishing!

PS You can see clips at www.theF3T.com and on the night we'll have some giveaways and prizes including a sweepstake to win a trip for 2 to the El Pescador Fishing Lodge in Belize.

Buy your May issue of Trout & Salmon

Last year I had a wonderful day with Trout & Salmon editor Andrew Flitcroft and his ace photographer Peter Gathercole on our new 6 miles of fishing at Ilsington on the River Frome in Dorset. You can read an account of the day, plus Peter's great photos in the May issue which hits the newsstands on April 9th. 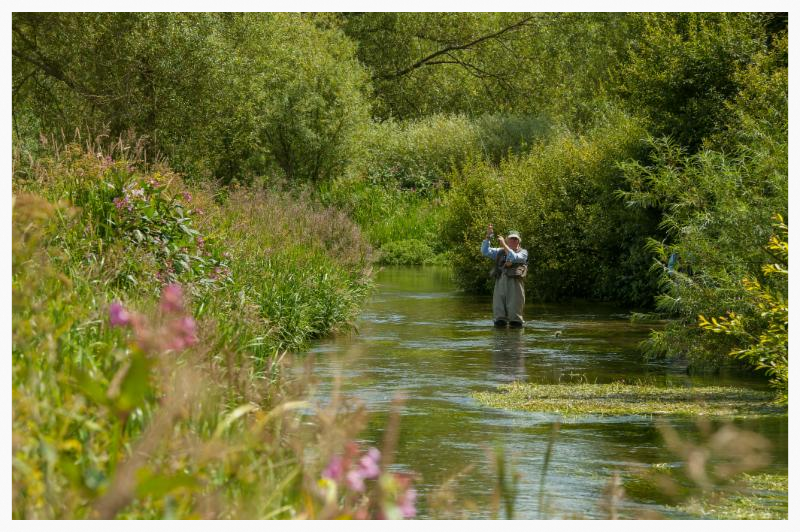 More details of Ilsington via this link.