Are we accidental fish killers?

Are we accidental fish killers?

Whatever your views on the Environment Agency, the government arm of the Department of Farming and Rural Affairs tasked with looking after fishing, you can't ever fault them when it comes to sending out letters guaranteed to scare the living daylights out of you. One such letter arrived last week entitled "Advice note to river and stillwater fisheries - Protect fish and wildlife in dry weather". 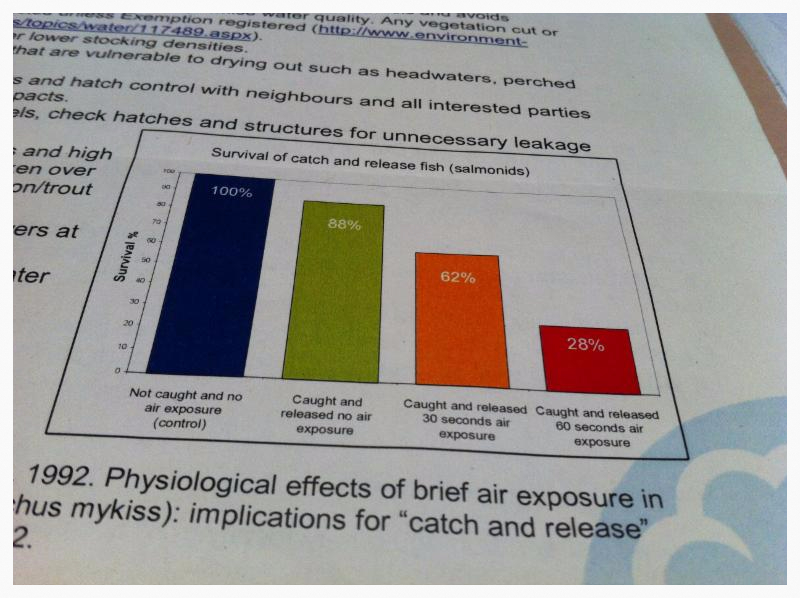 Now my eye was immediately drawn to the graph in the letter (reproduced opposite) that is alarming to say the least. It is stating that over one third of trout caught and released after 30 seconds of air exposure will die.

Double the time in air and seven out of ten fish will die. This is no hooky survey, but rather from the much cited study by Canadians, Ferguson and Tufts back in 1992 that examined the physiological effects of brief air exposure in exhaustively exercised rainbow trout and the implications for catch and release.

Somehow this survey doesn't seem right to me. Here at the teaching lake at Nether Wallop Mill I'd guess we catch and release at least fifty rainbows each week, most of which are taken out of the water before being unhooked and released. Are they out for as long as a minute? I doubt it, but thirty seconds seems a reasonable estimate so do I see fifteen or more floating belly up each week?  No I don't. Maybe one or two, but even that is unusual. So what's this all about?

I guess we all assume catch and release is a relatively new concept, but actually it was first proposed way back in the early 1800's and the first formal regime for recreational angling I can find was introduced to the Penobscot River, Maine, USA in 1873 for Atlantic salmon. That said it was not until the 1950's that anyone started to question the mortality rates and since then there has been a surprising amount of science about it all.

The one thing everyone seems to agree is that barbless hooks reduce mortality for all the obvious reasons. Surprisingly some studies rated treble as better than single hooks but this was only for certain species (not salmonids) like striper bass who tend to swallow a single hook. Where in the body is best to be hooked? Well, the jaw by far with 98% survival as against 18% survival when hooked in the gills. Should you cut the line rather than struggle with a hard to remove hook? The answer is yes; the distress is less and fish will shed hooks over time.

The biological characteristics such as size, age or gender hardly features in any of the analysis, whereas there has been a great deal of work on temperature. For instance it is critical for Atlantic salmon that the water temperature is in the 8-18C range for survival. The reservoir anglers amongst you might be in for something of a shock; the depth at which you fish your fly has a significant impact on trout survival. Hooked on the surface 98%, hooked on a lead line 92% and with downriggers 85% survival.

I must admit I never thought very much about what happens to a fish once it swims away; my assumption has always been that if it swims away with a healthy kick of the tail all is well. Apparently not. There is plenty of evidence of delayed mortality, though statistics are hard to come but I did see one study where nearly half of all bonefish died due to sharks predating on the fish during the post-release recovery phase. But that is really a habitat issue.

The critical thread that runs through every study you'll ever read on catch and release is that the biggest killer of trout is exposure to air; however gently you release your fish it is the air that kills them. There is plenty of disagreement as to what is the critical time period for different species but for trout more than two minutes seems to be the point of no return. The fish may swim off, but there will be too many physiological changes for long term survival. Clearly every second counts. We might debate whether thirty seconds is twice as bad as fifteen seconds but ultimately once a trout starts gulping air the clock is ticking. One of our Guides likes to tell pupils to hold their own breath for as long as the trout is out of the water. It is a good way to make an important point.

Three cancellation resales on a 2-for-1 offer. You'll have to be quick for Whitchurch Fulling Mil which is tomorrow, but there are two consecutive days for Bullington Manor next week

Bullington Manor (Upper Test) - July 28/29
If you like classic chalkstream sight fishing with nymphs and dries you won't do much better than Bullington Manor. Save £229 with the 2-for-1 on Tuesday or Wednesday next week.

I can't believe I am writing this but don't stow away your Mayfly patterns just yet as I'm getting plenty of reports of Ephemera danica hatches. 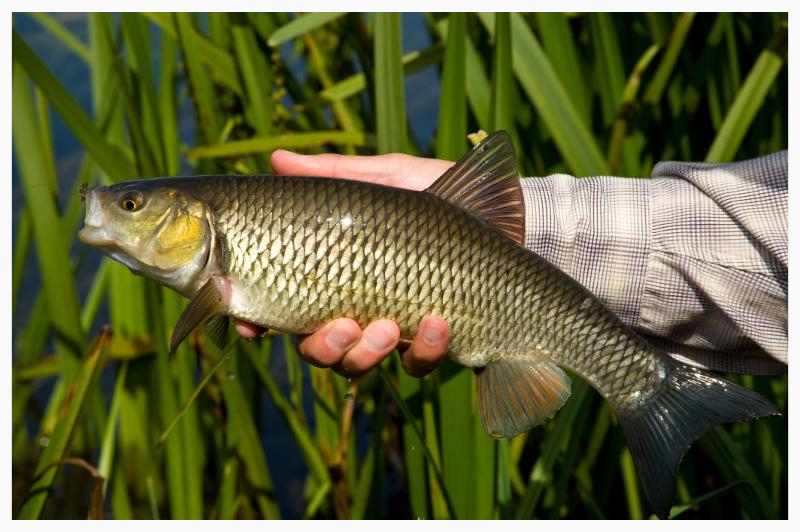 And as they say hatches make catches with plenty of people digging deep into their fly boxes to take fish on May favourites like huge Grey Wulffs and French Partridges. It is far from unheard of on the Avon at this time of year, but the Nadder and Test? Well, it is something of a freak event to be relatively commonplace so don't be surprised if a few make an appearance.

On the subject of oddities there has been a spate of chub caught on the fly this month reported via the feedback forms. I've most frequently caught chub during the Mayfly weeks, so maybe there is some sort of connection but for the moment I can't work it out.

As it is the CLA Game Fair next week (July 31-August 2) five related questions. Answers at the bottom of the Newsletter. It is just for fun!

2) In what year was the first Game Fair?

3) What was the admission charge?

4) What is the record attendance?